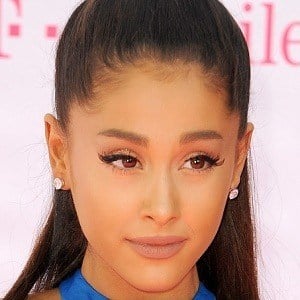 Pop star who released her debut album Yours Truly in 2013, followed by her second album My Everything, which featured the hit singles "Break Free" and "Problem." She first gained fame as an actress, portraying Cat Valentine on the Nickelodeon series Victorious as well as on the show's spin-off Sam & Cat.

She began her career as a soloist with various symphonies, such as the South Florida Philharmonic. She made her acting debut as Charlotte in the Broadway musical 13 in 2008.

She voiced the character Diaspro in seasons 3 through 5 of the Nickelodeon series Winx Club and appeared in the 2013 TV movie Swindle.

Her parents are named Joan and Edward and she has an older brother named Frankie Grande. She got engaged to comedian Pete Davidson in June 2018 after just a few weeks of dating, but the couple separated four months after the engagement. She also previously dated rapper Mac Miller, her backup dancer Ricky Alvarez, The Wanted artist Nathan Sykes, web video star Jai Brooks, and rapper Big Sean. In 2020, she began dating Dalton Gomez and the couple got engaged at the end of the year; the two got married in May 2021.

In 2011, she appeared alongside Miranda Cosgrove in an episode of iCarly titled "iParty with Victorious."