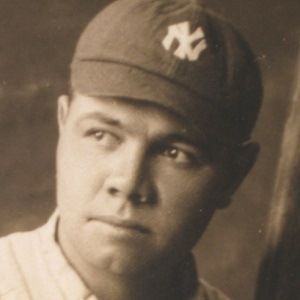 Revered by many as the greatest baseball player of all time, he set career records for home runs, RBIs, and bases on balls that have since been broken. He won 7 World Series Championships, 12 American League home run titles, 6 AL RBI titles and the 1924 AL batting title. He played for the New York Yankees from 1920 to 1934 after the Boston Red Sox traded him in exchange for cash.

When he was seven, his father sent him to St. Mary's Industrial School for Boys, where he learned shirt-making and carpentry.

He was known for his bat, but he also spent part of his career as a pitcher and led the AL in ERA in 1916. His nicknames included "The Great Bambino," "The Sultan of Swat," and "The Babe."

He married Helen Wooodford on October 17, 1914, and they adopted their only child, Dorothy, in 1921. He remarried to Claire Merritt Ruth in 1929 and the couple had a daughter named Julia.

His record for most home runs in a season was surpassed by New York Yankee outfielder Roger Maris in 1961.