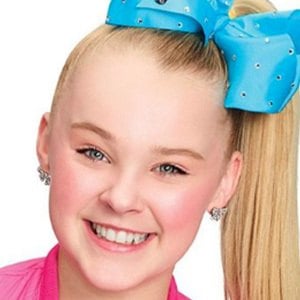 Dancer, singer, actress and social media sensation who has earned over 12 million subscribers and more than 3.5 billion views on her YouTube channel Its JoJo Siwa, where she posts comedy sketches, vlogs, Q&A's, challenges and other fun videos. In 2016, she released her debut song "Boomerang." She signed a talent deal with Nickelodeon in 2017.

She began dancing before she was even 5 years old and learned to love hip hop dance over any other style. She enjoys jazz, contemporary, and lyrical as well.

She was a top 5 finalist on the second season of the Lifetime series Abby's Ultimate Dance Competition and the youngest dancer to make it to the season 2 finale. She was cast in the 2018 Nickelodeon TV movie Inside Voice alongside Jace Norman. She joined Dance Moms in season 5.

Her full name is Joelle Joanie Siwa. Her mother Jessalynn owns her own dance studio in Omaha. Her dad is named Tom and her older brother is named Jayden. She has four dogs named Coco, Lulu, BowBow, and Buddy. She dated Mark Bontempo in 2020. In January 2021, she publicly came out as a member of the LGBTQ+ community and soon after revealed that she has a girlfriend named Kylie.