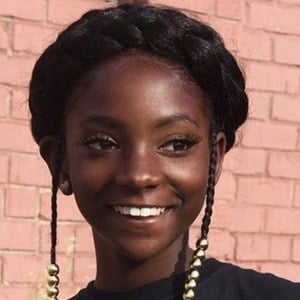 Widely known for founding the Flexin' In My Complexion clothing line to combat racism and colorism. Her story went viral in May 2017, and she was subsequently profiled in The Independent, BuzzFeed, and The Huffington Post. Also an actress, she was cast in the seventh season of the popular Brat series Chicken Girls.

She was inspired to begin her clothing line after being bullied for her dark skin complexion in school. She founded Flexin' In My Complexion at age 10.

She has grown in popularity on Instagram, amassing more than 300,000 followers to her kherispoppin account. She became a member of the girl group Run The World.

She has one older sister, Taylor, who helped begin her Flexin' In My Complexion brand with a Tweet in March 2017.

She has been publicly supported on Derrick Jaxn's website for promoting her anti-racism message.