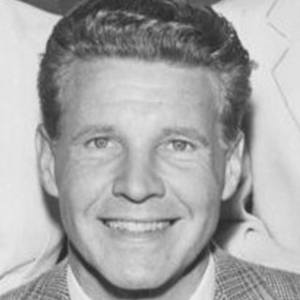 He became known as the husband of Harriet Nelson in The Adventures of Ozzie and Harriet, a radio and television series.

While in college, he made a living by playing saxophone and coaching football; he funded his band by collecting the front pages of newspapers and returning them to the newspaper offices as unsold.

In 1935, Ozzie Nelson and His Orchestra released "And Then Some," which became a #1 hit for one week on the U.S. pop singles chart.

He married vocalist Harriet Hilliard in 1935 and they had a son named David in 1936 and another one named Eric "Ricky" in 1940.

His son Ricky Nelson appeared on the sitcom with him, and later went on to become a famous singer and actor.